THE LILY and THE LION by Catherine A. Wilson and Catherine T. Wilson

Court intrigue, romance, and adventure combine to create a thoroughly enjoyable and suspenseful medieval saga, The Lily and the Lion by Catherine A. Wilson and Catherine T. Wilson. It is an enthralling melodrama set in 1360 France and England, and the first book in the Lions and Lilies series. A mostly epistolary novel, the action nevertheless vibrates with urgency.

The novel begins with Cecile d’Armagnac, a beautiful young French courtier, learning that her engagement to the Dauphin has been called off. When she asks why, she discovers that the man who raised her, Jean d’Armagnac, is not her real father. While he does not know much about who her real parents are, he has recently learned that she has a twin sister who has been raised at a convent in England.

Cecile writes to her new sister, despite a lingering bitterness over these revelations. While Cecile and her sister, Catherine, could not have been raised in more different circumstances, they begin to find common ground. Meanwhile, their discovery of each other alerts the very villains they were hidden from nineteen years ago to their presence. The convent’s steward, Gillet de Bellegarde, proposes that he act as courier for the sisters’ letters. Instead, he becomes their protector as Catherine survives an assassination attempt by the wicked Lord Salisbury and Cecile becomes entangled with the Black Prince, the English prince Edward.

After nearly drowning, Cecile escapes the Black Prince and is rescued by Gillet. As they flee to the countryside together, their sparking banter evolves into love in the face of numerous complications. Catherine is guarded in England by Gillet’s mentor, Simon, the Earl of Wexford. A crude man, he shocks Catherine’s fresh from the convent sensibilities even as he helps her discover the realities of the world. Several twists serve to complicate both sisters’ paths toward the placid family life and blissful reunion of their dreams. As they seek the identities of their parents, they learn that their past is darker and the future more uncertain than they could have imagined.

Against the backdrop of conflict between England and France, historical details add depth to the narrative and explore a period of history not often touched in historical romance. Dialogue such as, “You impertinent cesspit of deceit!” adds an element of over the top fun. While the history here certainly is not the story’s main component, The Lily and the Lion will beguile readers with its compelling characters and nonstop drama. 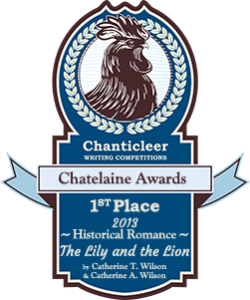 Cecile and Catherine finally meet for the first time. Fortunately for this reader, the next Lions and Lilies book, The Order of the Lily, is available.

The Lily and the Lion by Catherine A. Wilson and Catherine T. Wilson was awarded First Place for Historical Romance in the Chatelaine Awards for Romantic Fiction, a division of the Chanticleer Reviews Novel Writing Competitions.