LOVE and THE ARTS, a Blog-post from Kiffer Brown 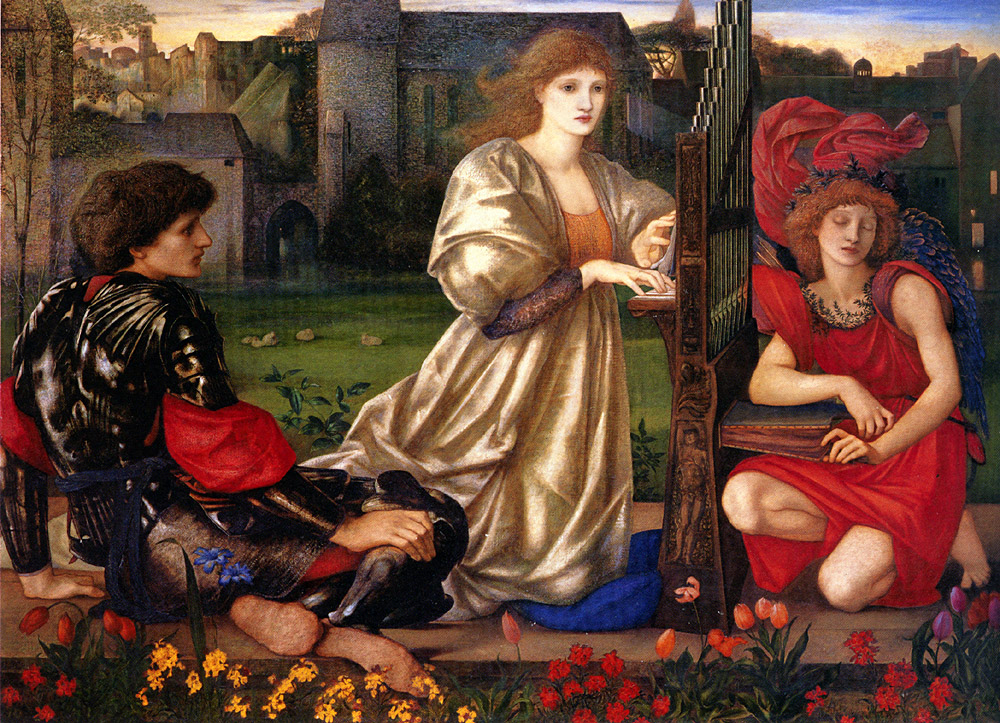 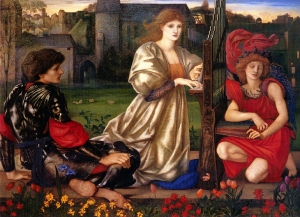 The Love Song by Sir Edward Burne-Jones portrays each of the three young people alone with their thoughts and dreams, but gathered together, as the sheep are in the distance, for comfort and support.

Sir Burne-Jones was forty years-old when he painted this, perhaps remembering the daydreaming times and wistfulness of his youth.

Sir Burne-Jones was mentored and influenced by Dante Gabriel Rossetti. Rossetti was one of Pre-Raphaelite Brotherhood founders who, in 1848, sought to create works of art that “conjured a realm of heightened emotions, aspirations, and visual splendor that would elevate a modern society beset by change.” 1

These are apt words for today’s hyper-charged digital age.

Sir Burne-Jones own words asserted, “Only this is true, that beauty is very beautiful, and softens, and comforts, and inspires, and rouses, and lifts up, and never fails.”  And this sentiment  is where the Pre-Ralphaelite movement artists of poets, novelists, painters, music composers, and craftsmen found connection and inspiration for their collaborations and works. 2

We have chosen Dante Gabriel Rossetti’s work to symbolize several of our writing competitions logos. We feel that the sentiment expressed by the Pre-Raphaelite movement exemplifies what inspires many authors to pick up their  proverbial pens to express their emotions and their observations of the visceral dynamics of living. 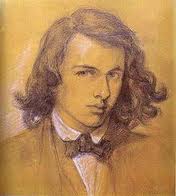 Imagine nineteen-year-old Dante Rossetti looking at himself in a mirror as he is drawing his self-portrait in 1847.

As a young man, Rossetti was known to be confident, articulate, and charming as he was zealous, emotional, and irresponsible.  His contemporaries called this a “poetic nature,” which drove him to combine the “human with the divine” in his art. His  self-portrait captures these many traits. 1

We felt this portrait of  Rossetti would be perfect to represent Chanticleer’s novel competition for young adult fiction as it deftly embodies the flashing range of emotions that young people from any era have experienced, and probably will continue to experience in the future, as they encounter the crossroads of adulthood. 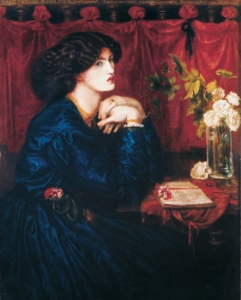 Twenty years later Rossetti painted Jane Morris in a “Blue Silk Dress” in 1868. She was twenty-nine.

He sublimely captures the many nuances of romance, love, and longing. Did a lover give her the flower tucked into her sash? What is she wistfully looking up from reading? What is on the other side of the drapery? Where did the flowers in the vase come from? Did she cut them or are they from a different suitor? As  many find with Rossetti’s work, there are endless possibilities for story ideas when viewing his art.

Rossetti was a scholar of Medieval Art and Letters, along with pursuing knowledge of Arthurian Legend. He was profoundly influenced by his namesake, Dante Alighieri, and the English poet John Keats.

Rossetti’s portrayal of Jane Burden Morris in the “Blue Silk Dress” (to me) is an ethereal image of women–a perfect image for the Chatelaine Awards for Women’s Fiction and Romantic Fiction.

An Arthurian Legend Comes True in the Victorian Era?

Jane Burden (Morris),  known as the Pre-Raphaelite ideal of beauty, came from an impoverished background, her father a stable-hand and her mother an illiterate domestic servant. Rossetti and Burne-Jones were struck by her beauty when they saw her when she and her sister attended a play in Oxford in 1857.  The artists asked her to model for them. She was eighteen and destined for a life as a domestic servant. The rest is history in this fairy-tale-come-true story–essentially Arthurian legend come to life. 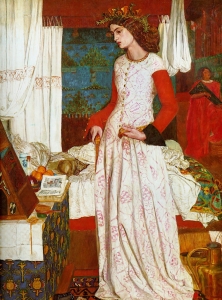 Morris fell in love with Jane when she was modeling for his “Guinevere” painting and he asked her to marry him.  After they were engaged, she was privately educated to become a suitable wife for a gentleman of high society standing such as he was. They married on April 26, 1859; she was twenty, Morris was twenty-five.

Apparently, she was quite intelligent, as she quickly took to her lessons and became fluent in French and Italian, became an accomplished pianist, and was known for her refined manners and eloquent  speech.

Jane Burden Morris is considered to be the woman who inspired Bernard Shaw’s Pygmalion, more currently known as My Fair Lady of Audrey Hepburn fame. 1

After her marriage to William Morris, she continued to model for Rossetti, which is another story unto itself. Jane Morris is said to have “consumed and obsessed him (Rossetti) in paint, poetry, and life.”4

Was Morris Rossetti’s King Arthur? Was Rossetti Morris’s Lancelot? And Jane, was she Morris’s Guinevere?  Does life imitate art?

Love and the Arts during the Victorian Era in England

If you ever get the opportunity to view the works of the Pre-Raphaelites, I urge you to do so! I have had the pleasure of viewing them at the Metropolitan Museum of Art in New York City and at a touring exhibit at the Rijkesmuseum in Amsterdam.  An interesting note is that the Rijkesmuseum titled the Pre-Raphaelite exhibit unabashedly as “Wives and Stunners.”  The artists and their wives must have been the subject of many a gossip column in the newspapers and scandal broadsheets as well as inspiration for the contemporary authors of that era: Oscar Wilde, Charles Dickens, the Brontë sisters,  Alfred Tennyson, Rudyard Kipling, and other notables.

The Pre-Raphaelite art movement is one that has resonated with me since I was teenage girl. And now that I am a woman of a “certain age,” I find that it still does, increasingly so–especially now that I have come to know more about the artists and their muses.