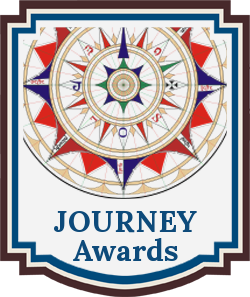 The JOURNEY Awards writing competition recognizes emerging new talent and outstanding works in the genre of  Narrative Non-fiction. The Journey Awards is a division of the Chanticleer Book Awards & International Writing Competitions.

We are pleased to announce the JOURNEY Awards Official Short-List (Semi-Finalists)  for 2016 for Narrative Non-fiction.

Congratulations to the JOURNEY AWARDS 2016 Semi-Finalists and Good Luck to them as they compete for the First Place Category Positions.

Good luck to all the Journey Awards Semi- Finalists who made the Short List as they compete for the First Place Category Positions.

The 2016 Journey Short Listers will then compete for 5 First Place Category positions that will be announced and awarded on April 1, 2017 at the Chanticleer Authors Conference and Awards Gala, Bellingham, Wash. All Short Listers in attendance of CAC17 will be given recognized at the awards ceremony and will be given special badges to wear at the conference.

We are now accepting entries into the 2017 JOURNEY Awards. The deadline is February 28, 2017. Click here for more information or to enter.

More than $30,000 worth of cash and prizes will be awarded to the 2016 Chanticleer Novel Writing Competition winners! Check out out fifteen genres to enter your works into to compete on an international level and distinguish your books from the two million new titles hitting the market this year.