HOW to SET the WORLD on FIRE by OZMA Award-Winning Author, T.K. Riggins – Sword & Sorcery, YA, Coming of Age, Dragons

Are you looking for a magical fix this summer? Pick up the award-winning Young Adult book, How to Set the World on Fire by 2017 Chanticleer Award-Winning author for the OZMA – Fantasy Awards, T.K.Riggins and sink into a worthy example of the “school of magic” sub-genre sparked by the Harry Potter series. 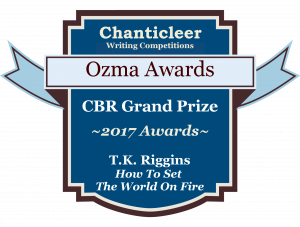 takes up residence in the Warriors castle at The Academy, reuniting with his older sister Cali, a member of the school’s Scholars branch. From his first day, Kase gains an enemy in Cali’s boyfriend Niveous. Sent to the Disciplinary Room thanks to Niveous’s trickery, Kase makes fast friends with the two girls also in detention: Talen, a sweet but awkward savant, and rebellious Lenia, whose control over fire tends dangerously toward pyromania.

Kase hones his skills in weaponry while he and Lenia flirt themselves into love, while everything is building in anticipation to the Quest Series, the annual Academy competition. The teams are usually made up of four students from a single school, but Cali, Kase, Lenia, and Talen bend the rules to form their own team. They find support from the Grand Master and Professor Bright, the elements instructor, both of whom see the unusual potential in these four students.

When the Quest Series begins, the plot coalesces into an exciting journey, not only into the four corners of the realm, but also into the students’ psyches. Each of the five Events poses mental, physical, and emotional challenges for Cali’s team, The Liberati. Each student’s mental aptitude and fortitude are tested, as well, but not only by their ordeals—some teams join with Niveous’s crew to hamstring the favored four. Their malice, however, turns to alarm when it becomes apparent that The Liberati–Kase, and Lenia in particular—have powers far beyond those developed by The Academy.

Being a school of magic sub-genre, of course, one would be right in expecting the same feel and some of the same elements setting the stage as one would find in Harry Potter. For example, in this book, you’ll find former students turned evil, a headmaster, various schools within the larger school, an exciting and dangerous competition, Kase’s singular magic, and spiders. Another similarity fans will rejoice in, like Harry Potter, the author has just disclosed that this is indeed Book One of a series!

More impressively, the story holds up very well on its own, and author Riggins manages to create a world that has one foot in fantasy and the other in up-to-the-minute reality. Sage mirrors, for instance, are only slightly more magical than smartphones and the kids take selfies to prove their accomplishments. Very smart.

What Riggins also gets very right is the way he integrates words of wisdom into the competition. In one instance, the Grand Master exhorts them to: “Know who you are, but don’t be discouraged by who you are not.” And in another: “Sometimes the hardest part about finding something beyond your reach, is finding yourself first.” But avid readers will find The Liberati’s call to arms the best advice of all: “To the library!”

T.K. Riggins won the 2017 OZMA (Fantasy) Grand Prize in the Chanticleer Int’l Book Awards for How to Set the World on Fire!