A TALL TALE ABOUT a DACHSHUND and a PELICAN: How a Friendship Came to Be by Kizzie Jones – Children’s Books, Tall Tales, Friendship 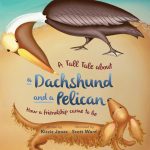 Title: A Tall Tale About a Dachshund and a Pelican: How a Friendship Came to Be
Author(s): Kizzie Jones
Genre(s): Children's Books, Friendship, Tall Tale
Publisher: Tall Tales (2016)

Goldie the dachshund thinks she’s found a new friend. When she comes upon a pelican on the beach during her walk with her owner, she immediately approaches the strange creature, trying to strike up a new friendship based on their physical similarities.

After she points out they both have long muzzles, Pelican shows how its mouth is made to hold fish, which Goldie cannot do. Undeterred, Goldie points out their similarly long bodies, but Pelican explains how its body isn’t covered with fur, but feathers made to fly. Finally, Goldie accepts how truly different the two are and is about to leave disappointed when Pelican explains that creatures with differences can still be friends as long as they try to learn about each other. Just like Goldie and the little girl who owns her, the two very different creatures become forever friends.

Kizzie Jones has created a whimsical tale celebrating the differences in everyone. Whether human, animal, or bird, differences don’t have to separate. In accepting the differences rather than forcing similarity, people can create a symbiotic existence, just like a dachshund and a pelican. In a world that often condemns individuality and forces an artificial sameness, this short children’s book, A Tall Tale About a Dachshund and a Pelican: How a Friendship Came to Be, embraces what makes people, or in Goldie’s case, animals, unique.

While myths and tall tales typically show fun explanations for how the natural world works, A Tall Tale About a Dachshund and a Pelican takes a more emotional and less physical path. When Goldie is about to leave disappointed, Pelican points out what makes both him and Goldie unique, effectively cheering Goldie on to appreciate those differences while showing how friends don’t have to be the same, only accepting and receptive to diversity.

It is also beautiful that Goldie sees similarities where there really aren’t any. She looks for ways to identify with Pelican before she introduces herself. She works to find common ground even when it means trying (and failing) to fly. What a better place this world would be if everyone looked for the “sameness” in others instead of first attacking the differences!

Scott Ward’s illustrations make the tale come alive with bright colors and whimsical representations of sand and sea. An unusual feature is the illustrations within the written text. Graphic designer, Nelz (Nelson Agustín), who did the interior and cover book design, highlights some important words by making them cartoonish and large, which adds to the overall fantastical appearance sometimes with a sprinkling of stars, sometimes with a rainbow of color.

Perhaps Goldie says it best when she summarizes, “All kinds of creatures can like each other without being alike.” Humans of all ages, not just the children for whom the book is written, can use a little more Goldie attitude.

Simply put, here is a beautifully penned children’s story about friendship and diversity and what happens when a dachshund and a pelican happen to meet one glorious day.

A Tall Tale About a Dachshund and a Pelican: How a Friendship Came to Be won First Place in the LITTLE PEEPS Awards for Kizzie Jones. Congratulations!