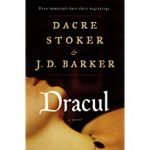 The brilliant gothic horror story, Dracul, awaits those who crave novels that quicken hearts and cause sleepless nights. One would swear it is from the horror master himself, Bram Stoker, who penned the legendary Dracula.

Dracul is ripped from the pages of Bram Stoker’s diary, along with those of his sister Matilda’s, and brother Thornley’s. Much like Dracula, multiple narrators push the story forward with their individual perspectives and points of view. Inch by inch the reader is pulled in until it is impossible to go back. Such is the lure of Dracul by J. D. Barker, and Dacre Stoker

The story opens with a sickly, seven-year-old Bram, who has been chronically ill since birth and frequently near death. He is confined to an attic room under the care of his nanny, Ellen Crone. His nanny dotes on Bram, but she has a disturbing habit of disappearing frequently, sometimes for days on end without explanation or apologies upon return.

During one of her absences, Bram’s health takes a downward turn. Near death, his desperate parents summon the family doctor who bleeds a barely conscious Bram with leeches. When Nanny Ellen returns and sees Bram pale and fading fast, she shoos everyone from the room and shuts the door. In the morning, the leeches are gone, the illness has passed, and Bram feels a vigor and strength he has never known.

Afterward, a conversation between Bram and his sister turns to Nanny Ellen and her odd absences, how her appearance seems to change dramatically from day to day, and how neither one of them have seen her eat or drink⸺anything. Soon their curiosity overtakes them, and they begin to snoop. The next day, Nanny Ellen is gone along with all of her possessions.

To discover what happened to their beloved nanny, and who she really is, sets the Stokers on a path to encounter the sanguinary Dracula. Their lives are forever changed.

This harrowing pursuit of the truth is beautifully rendered horror with palpable tension and suspense, drawing the reader ever closer to the edge of terrifying darkness.

Deftly written in a classic 19th-century gothic style, Dracul resonates with power-rich prose that adds to the atmosphere and the construct of the story. A modern masterpiece, Dracul is everything horror can and should be. It doesn’t rely on gore, but rather captivating storytelling. And yet, the terror and intrigue are unrelenting.

This novel belongs in the lexicon of all things vampire.

Dracul is the inception of the iconic dark love story that compels and terrifies us. Our advice? Close your windows. Lock your doors. Turn the lights on. Place a silver crucifix around your neck, and make sure to have a few sharp wooden stakes nearby. In other words, prepare yourself for a transfixing journey into the diabolically delicious world of Dracul ⸺ if you dare.

Dracul is also available in hardcover and audiobook.