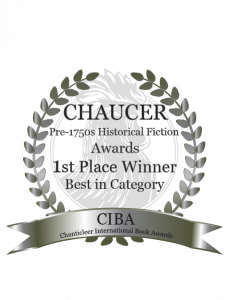 In the twenty-sixth year of Augustus Caesar’s reign, Marcus Gavius Apicius purchased nineteen-year-old Thrasius for twenty thousand denarii, enough money to buy more than sixty normal slaves, but Thrasius is more than the typical slave. Born to a slave woman who died in childbirth and whose name he never knew, Thrasius has trained for seven years as a cook in the kitchens of Flavius Maximus, a man known for his unforgettable dinners, and Apicius hopes the young coquus will lead him to the ultimate culinary fame, gastronomic advisor to Caesar himself.

Grateful to be saved from the cruelty of the slave trader, Thrasius throws himself headlong into the new role and proves tremendously successful, but an ominous prophecy given to Apicius on the day he purchased Thrasius looms over every achievement. As Apicius climbs higher and higher in the Roman political world, Thrasius becomes an ever-growing asset eventually becoming more advisor than cook and feels the pressure of helping Apicius accomplish his fame at any cost, even his family and friends. His chase for fame becomes both consuming and destructive. Though Apicius refuses to see the price of his obsession, Thrasius knows a reckoning is coming and prays the gods can save him from the man who controls his life.

This masterful thirty-year tale rejuvenates life in ancient Rome, a place where favors become life-changing, where people are bought and sold, and where death could reside in a glass of wine or in a snake-filled box. The complex, rich storyline, entwines real Romans with endearing fictional characters. Readers will recognize historical figures like Pliny and Ovid, who burst to life on the pages of this novel. Though perhaps not as well-known as some of the other characters, Marcus Gavius Apicius, an overly ambitious man who bankrupted his vast fortunes with his sumptuous cenas and expensive gifts, is credited with the first cookbook and a cooking school. Readers will see the rise and fall of this man who desired fame over everything. His single-minded ambition is contrasted with Thrasius, his fictional foil in many respects. Where Apicius wants his recipes in every Roman kitchen and his name spoken in jealous whispers, Thrasius seeks only to create good food and safe life for his love, Passia.

Fate plays a major role in the lives of the characters and poses important philosophical questions throughout the novel. From the opening pages, the importance Romans placed on omens, fortunes, and premonitions is evident. Apicius, a man who refuses to acknowledge the undesirable part of his sinister fortune, often with acts with dire consequences, begging the question is fate fixed, or do men create their own? In taking charge of his destiny, does he, in essence, destroy himself?

Even when he is told that he will have “as much sadness as there is success,” he continues to connive and conspire until he loses everything. He finally gains his coveted position but at the expense of a man’s life and a debt which will take everyone he loves.

In his blindness to everything but fame, he turns this prophecy into truth, bringing about the “greater failures [clustered] to the sides” of each success. Even the wholesome Thrasius isn’t immune to the question of fate versus free will when he curses Sejanus, a cruel, unscrupulous man. Though his curse takes twenty-five years to come to fruition, Thrasius wonders how much blood is on his hands when the culmination of the curse also results in the death of people Thrasius loves. Has he doomed himself by fiddling with fate? In taking fate into their own hands, both Apicius and Thrasius pay enormous costs.

Obscene wealth and devastating poverty. The height of fame and the desolation of obscurity. On the backs of many, one man builds his legacy while another prays for freedom. Feast of Sorrow creates a world where curses are feared, blessings hinge on blood sacrifice, and history becomes real.