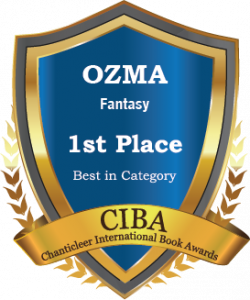 Writer and ecologist Karin Rita Gastreich draws inspiration from her trips to the magical forests of Costa Rica to bring life to the Silver Web series. An unforgettable journey, Daughter of Aithne, is the finale to the epic story of Queen Eolyn the High Maga, set in a world of seemingly never-ending war where female practitioners of magic (maga) are feared.

Set ten years after the conclusion of Gastreich’s second installment in the series Sword of Shadows, Daughter of Aithne begins during an era of abundant peace. That peace quickly turns to turmoil when a group of Eolyn’s magical progeny commits an act of grave betrayal by kidnapping Princess Elisara, daughter of the former Queen Taesara.

The Mage King Akmael immediately orders all maga to lay down their arms and have their magic bound. For years magas have been prosecuted for having magic and were all but annihilated by the crown. Except for a small amount that managed to escape hoping to one day be able to live their lives of magic according to their beloved culture. Fear of women’s magic is still alive in the kingdom, and the King, wishing only to protect his queen and her daughters, attempts to avoid an outbreak of war by banning all magas use of their craft.

Gastreich uses vivid language to transport readers into the story. An overarching theme of distrust and vying for loyalties in and among kingdoms presented in this third installment of the Silver Web series is reminiscent of other high fantasy series such as George R. R. Martin’s A Song of Ice and Fire. Gastreich masterfully executes an effective use of narrative misdirection throughout the story.

Karin Rita Gastreich has an apparent love for the magic of nature and breathes that into the heart of her books, but she also successfully sets real-world issues at the forefront. She follows a common trope within the Young Adult genre by taking an issue from today and melding it into her narrative. Here, the main element in the Silver Web trilogy is the stark contrast of beliefs and opinions centering around magic and especially female magic welders. Many fear their magic and believe magas are dangerous, but then have little or no issue with male mages.

A triumphant story of adversity, Daughter of Aithne is the exciting conclusion to the Silver Web series. Readers of all ages may hope this is not the last time Gastreich will return to her fantastical world of magic.