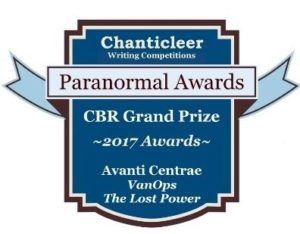 Avanti Centrae takes readers on an action-packed gallop around the globe in her debut award-winning novel, VanOps: The Lost Power.

Maddy Marshall, 31-year-old app designer and aikido instructor, and her twin brother, Will, have been summoned to their father’s Napa Valley winery. He has something important he needs to tell them.

The estranged twins haven’t seen each other in a while. Will, now in Brazil and newly married, has brought his wife Maria with him. As Will and Maddy catch up in the driveway, a shot rings out. They rush into the house to find their father and Maria have been shot. Maria is dead. Their father clings to life long enough to pass along a family secret. They witness a blond man racing away from the winery in a black BMW.

Will and Maddy are descendants of the Argones bloodline and related to the current king of Spain, and now they must seek out a woman, a lawyer whom their father trusted, to receive the first clue in a quest to fulfill their birthright.

On their way to the lawyer’s office, Will and Maddy are ambushed by the same blond man they’re sure murdered their father and Maria. After a short chase, they evade him when his car crashes through a guardrail, plummets to the bottom of a ravine and bursts into flame. Will and Maddy waste no time hightailing it to the lawyer’s office, relieved to have the killer off their trail.

The lawyer has a package for each of them, filled with gold, diamonds, cash, and a letter. The letter tells them they are to use the money to fund their quest, which begins in Spain, where their great uncle, the king, will give them their first clue. They are to find an ancient relic of great power that has been safeguarded by their family for centuries. They must not only unravel the clues as to its location but must also pass a series of tests along the way designed to show they are worthy of possessing so much power.

As Maddy glances out the window, she is shocked to see the blond sniper charging the stairs of the lawyer’s office. They hastily escape out the back door. How did he get a car? How did he track them? Is his interest in them somehow linked to the relic? And how would he even know of its existence?

Will and Maddy need a place to hide out, someplace safe where they can rest and think. They destroy their cell phones just in case that’s how they’ve been tracked and decide to head to Lake Tahoe and their old childhood home. While in Tahoe, they bump into an old friend from high school, Bear Thorenson. Bear used to have a crush on Maddy back in the day, though she never encouraged his affection. He is now a Marine and filled out quite a bit. They soon find out he’s also a history buff. Will and Maddy confide in him about the mysterious man on their tail. Bear agrees to accompany them to offer protection. And the trio is soon off for Spain.

Avanti Centrae has a knack for keeping the action moving and keeping her characters in peril. The stakes are high, and there’s no telling what’s around the next corner. If you fall in love with the characters, this is the first in a series so you will be able to get your next fix in the near future.