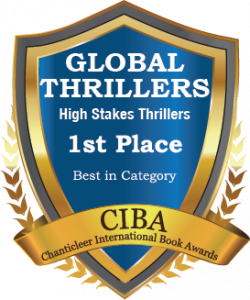 American timber company, NTI, flies over a remote area of the Congo with sophisticated instrumentation. Data shows an immense, deep depression in the jungle floor, a giant caldera from an extinct volcano. Despite the depth of the crater, the canopy level above remains constant and gives no clue of what lies below. To NTI, this could be an indication of tropical hardwoods beneath, potentially the size of mature redwoods. To the indigenous tribes, the sunken forest is a forbidden zone guarded by a legendary black devil who brings sure death to trespassers.

NTI sends a group in to explore and determine if their data is correct, that what lies beneath is an untapped bonanza of timber. The group persuades a few local tribe members to guide them. They make it to the edge of the caldera and are never heard from again. When the tribal guides return home, they suffer banishment for showing strangers the way to the forbidden zone.

Zora de Rycken, an outdoor adventurer with exceptional jungle survival skills and Special Forces training, is enlisted to guide NTI scientist Carver Hayden to discover the fate of the first group and to complete their unfinished mission.

Once in their expedition staging area in Brazzaville, Congo, the second NTI team encounters an unscrupulous Russian billionaire, Oleg Levkov, with a timber company of his own. Though it would seem they are in competition, Oleg assures them his only interest is in the legendary black devil. Oleg is a big game hunter with a fascination for big cats. He is sure through his own research that the black devil is a giant black lion no one has seen before, and he wants to be the first to kill one.

When the NTI team arrives at their basecamp, the nearest open ground in the vicinity of the caldera big enough to land a helicopter, and the starting point for the previous NTI team, Oleg is already there. Oleg’s team has secured a native guide, Ngiome. Oleg’s helicopter departs just as the NTI team arrives, and Zora is sure she sees members of Ngiome’s tribe aboard. Has Oleg kidnapped these people to secure Ngiome’s services?

One thing is certain, no matter which company wins the timber rights to The Sunken Forest, the result will be the same. Pristine jungle unlike any in the world will be laid waste leaving nothing but an empty muddy scar on the Congo.

Barber Anderson weaves a captivating tale that lays out the consequences of Industrial greed and conservation set against a thrilling backdrop of jungle, violence, and sex.