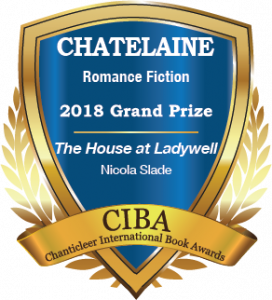 A surprise bequest, a cryptic benediction, and a box of long-lost letters thrust Freya Gibson in the middle of a life-changing mystery. As the personal assistant to successful novelist Patrick Underwood, Freya never takes a vacation. She believes herself content to be surrounded by the hustle and bustle of London, keeping Patrick on track and reigning in her newly discovered and completely uncertain feelings for her boss.

When Freya inherits a house from a heretofore unknown relative, she isn’t sure what to do. What’s more, the house comes with a clause preventing the immediate selling off of the relic. Freya has no choice but to visit the estate, still reasonably sure she will rid herself of the property; until, of course, she sets foot in the ancient home in Ramalley.

With Patrick gone on a business trip to the US, Freya decides to spend a week getting to know her new home and the village nearby. She quickly decides she wants to keep the enigmatic house with the enormous stone mantle, former church windows, and hand-carved hares. Still, as she falls in love with the house, she uncovers evidence that Violet, her cousin, and the former owner, knew a great deal more about Freya than Freya knows about herself. With each step closer to the truth, the house seems to draw her closer in a protective grip, perhaps giving her a chance at a new future.

Slade elegantly weaves the stories of all those who benefited from the waters of Ladywell’s actual well into the rich narrative. Lovers of history will relish the retelling of so many stories from various periods that shaped and were shaped by the area. From an adolescent Roman deserter to a broken-hearted WWI soldier, the stories not only show the residents of the area but also the tapestry of England at each telling. Ladywell drew the sick, the needy, and those looking to begin again, just as our modern protagonist does.

Freya’s story interweaves with the historical tales that serve to explain some aspect of the house or village. Through the historical details and period dialogue, the short excerpts rendered are just as rich as the main plot.

Reinvention and rebuilding are significant themes in Freya’s story as well as the house’s story. Damaged by an abusive relationship and the death of both parents, Freya discovers much about herself as she does about Ladywell through the investigation of her new home. While searching through her cousin’s belongings, she finds more questions than answers, and she must search deep within herself to find the strength to pursue the truth of her parentage as well as how her birth was arranged.

As she learns to lean more on Patrick, she discovers that he needs her as much as she needs him. Just like her new relationship with Ladywell, the love she and Patrick share both new and comfortably worn.

The House at Ladywell by Nicola Slade won Grand Prize in the CIBA 2018 Chatelaine Awards for Romantic Fiction.