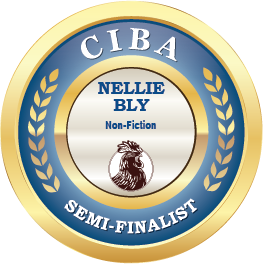 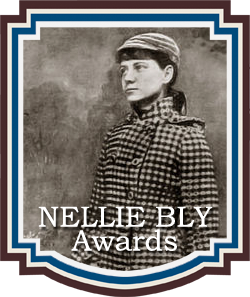 Nellie Bly is the the pseudonym of Elizabeth Cochran. She was born May 5, 1864 at the end of the American Civil War and the beginning of the cross-country railway systems. She died January 27, 1922. She was an American journalist who was known for her ingenuity and concern for others. She was instrumental in the Suffragist Movement in the U.S.A. reporting on the events and the vagaries that women suffered in their struggle for the right to vote.

Women were finally granted the right to vote after decades of protest, civil disobedience, marches, lectures, and lobbying on August 18, 1920—only one hundred years ago.  And Bly was there to report on it and interview prominent individuals who lead the movement such as Susan B. Anthony and others.

Nellie Bly began her career by responding to a newspaper article titled ” What Girls Are Good For” (apparently not much from the article). The editor was impressed by her angry rebuttal that he gave her her first job at a newspaper.

Bly then began writing articles exposing the working girls of Pittsburgh, the living conditions of slums, sweatshops, the immigrant experience, and more stories on the human condition in the US during the “Robber Baron” era of the late 1800s. She also traveled to Mexico in 1886-1887 where she reported on the corruption of the Mexican government and the horrible conditions of the poor. Her sharply critical articles of Mexican officials caused her expulsion from the country.

What Nellie Bly is most famous for is her expose on the deplorable conditions and the horrific treatment of patients at an insane asylum by feigning insanity and having herself committed. This 23-year-old was institutionalized for 10 days. It took quite a posse of layers from the New York World paper to have her released. Her exposé lead to vast improvements in the asylums. An added note, is that many of the “patients” were there because they were immigrants and could not understand what was being said and could not communicate.

However, we should not forget how incredibly difficult it was for Bly to find work. She had to rely on her wits and had to take chances with her very life and limb and her reputation to pursue a journalistic career. Bly is known to be a pioneer in her field and she is credited with launching what is  now known as investigative journalism and undercover journalism.

So without further ado, please join us in cheering on the following authors whose works comprise the first contenders in the first Nellie Bly Book Awards for Journalistic Non-Fiction.

This new division is in response to the request from the Chanticleer International Book Awards judges to acknowledge the many outstanding works that were entered into the Instruction & Insight Book Awards and the Journey Book Awards for Narrative Non-fiction. After reviewing the comments from the judges along with their suggestions, we decided to recognize these works and create a more fitting division in the CIBAs.

The following works are now Semi-Finalists in the 2019 Nellie Bly Book Awards for investigative and journalistic non-fiction.

These entries are now in competition for the 2019 Nellie Bly Book Awards Finalists positions. Good Luck to all!

The First Place Category winners will automatically be entered into the Nellie Bly GRAND PRIZE AWARD competition. The CBR Grand Prize Division Genre Winners will compete for the CBR Overall Grand Prize for Best Book and its $1,000 purse. First Place Category and Grand Prize Awards will be announced and recognized at the Chanticleer Awards Banquet and Ceremony on Saturday, April 18th, 2020, Bellingham, Washington. Hosted by the Chanticleer Authors Conference.

We are now accepting entries into the 2020 CIBAs. https://www.chantireviews.com/contests/