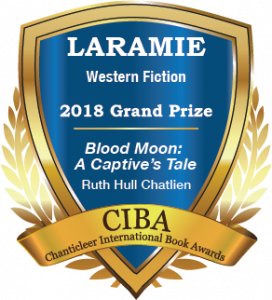 Ruth Hull Chatlien’s historical novel Blood Moon: A Captive’s Tale shines a light on two worlds trying to coexist in the 1860s Minnesota, that of Westward Expansion and white settlers, and that of the complex network of Sioux tribes dealing with starvation and disease. We follow her protagonist, Mrs. Sarah Wakefield, as she is thrust unwillingly into the midst of the Indian Wars.

Based loosely on the life of real captive, Sarah Wakefield, Chatlien explores both sides of this conflict, through the eyes of our terrified hero, who does what she must to save her life and the lives of her two small children. The first-person narrative in present tense places us in the thick of Wakefield’s narrow escapes, and the presence of the constant threats to her and her children.

Sarah Wakefield has one goal, to save her children, and if that means dressing like a Sioux and helping her captives gather water, forage and cook food, and set up the teepee, so be it. Her fellow captives, mostly women and children maintain their prejudiced and racist attitudes, but Wakefield does not. She sees her captives as human beings, not “savages,” who are trying to survive just as she is.

Chatlien expertly exposes the mindset between members of the Sioux tribe who had converted to Christianity and those who refused to convert. She exposes the injustices of an American Government that defaulted on treaty promises, causing starvation, illness, and death among the tribes, and the solution that many tribal warriors felt was their only recourse—war.

Wakefield sees the dichotomy of those warriors who want to fight and those who have converted to Christianity and become farmers. She feels the losses endured by those who didn’t want to fight because of their beliefs, but she realized that death would be their penalty if they refused.

The underlying themes in Chatlien’s novel provide us a complex and multidimensional read that captivates. Sarah is married. But her marriage is rocky—okay. Rumors of her past don’t help her present situation. But the woman she becomes as she survives her terror and provides for her children is a woman who will go to battle for a Sioux warrior in a court of law, even if it means losing her marriage and becoming a social pariah. At times readers may wonder if Wakefield might be an unreliable narrator suffering from “Stockholm Syndrome.” Nevertheless, she fights for the warrior who protected her and fights to save his life as he had saved hers.

The injustices Chatlien shines her fictional light on are bound to grate on the progressive-minded reader of 2020, and the conclusion to this narrative based on real events will undoubtedly leave us wondering how little has changed in race relations in the USA. Chatlien shows how simple gossip and the petty mindsets of the “normal” Christian women were as big a detriment to Wakefield’s survival in the Indian Wars.