A sci-fi thriller of physical and psychological combat, Virtues of War sends readers hurtling through space to find that our warlike nature has survived intact into the 26th century. This is no Star Trek mission of exploration, and there are no aliens: only long-established colonies in the Centauri system rebelling against Terran rule. Humankind’s technological evolution may have continued at breakneck speed, but social evolution has yet to catch up.

Lt. Katja Emmes, fast-attack strike leader of the small but pivotal warship Rapier, leads her troops into a hot zone on Cerberus—a minor operation to target a Centauri spy. It’s her first mission, and it leads to her first kill. It also leads to a full-on war between Terran Astral Forces and Centauri’s colonies which, despite an outwardly peaceful existence, have developed robotic killing machines far beyond Terran expectations.

Thus begins a narrative of nonstop action, swift pacing, and near-constant tension. Drops from space through planetary atmosphere are vicarious thrill rides that get the reader’s heart pumping, and battle scenes are wrought with suspense.

The author, Bennett R. Coles, an officer with plus 15-years experience in the Canadian Navy, demonstrates a crisp writing style, an impressive knowledge of military tactics and techno jargon, and an imagination crossed with a study of physics that has produced believable weaponry and space travel of the future.

Although action is clearly his strong suit, Coles has created an engaging set of characters. Katja Emmes has a chip on her shoulder placed by a cold-hearted father, and she’s constantly trying to prove herself against his Army bias. Lt. Cdr. Thomas Kane, Rapier’s captain, has a big heart, but he’s easily swayed by the promise of promotion and even more so by the scheming, power-hungry Lt. Charity “Breeze” Brisebois, a vixen of a villain. And sub-lieutenant Jack Mallory, whose disfigurement early on fails to dampen his sunny optimism, enjoys a steady climb in respect as his superior intellect transcends his boyish charm.

The Astral Forces are filled with assorted men and women at every level of rank, and each, though briefly drawn, are clear individuals. War may still be ever-present in a society that is now intergalactic, but at least equality between the sexes has been achieved.

Well into the story, exemplary soldier Katja ponders the incredible civilian death toll and the necessity of war. It is a potential turning point, and she nearly takes the next step into a desire for peace that one hopes could resound throughout humankind. But, luckily for Virtues of War readers, this is the first in a series, and such a step will take many more battles—both military and societal—before that possibility can be achieved.

Virtues of War has earned the Cygnus Awards 2013 GRAND 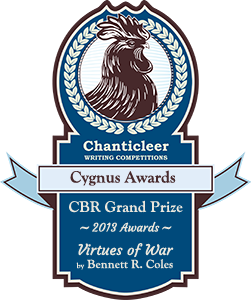 PRIZE for SciFi and Speculative Fiction Category,  a division of the Chanticleer Book Reviews Novel Competitions.