An Editorial Review of “Propositum” by Sean Curley

Many know the story of how Jesus Christ came and founded Christianity through the death, resurrection, and crucifixion, but do we know the full story, now millennia old? Sean Curley’s story, Propositum, unfolds to answer this question in a book that is part historical text and part political subversion. Caesars rise and fall by the decisions made by Proculus and Maximus, two great minds who subtly guide the ebb and flow of the Senate and the most powerful voices in Rome, just barely ahead of the crumbling empire.

The Roman Empire is no longer a Republic; it is failing. Since the death of Augustus Caesar, each of his successors has proven weaker, feeble-minded, and unable to rise to the governance of the former Republic. Proculus, a former senator cannot bear to see his country fall into an inevitable civil war with Judea. His solution is to gather Saul, a young man who admires the senator greatly, his military friend Maximus, and Maximus’ daughter Curia. Each character carries a vital aspect of the plan to fruition. The plan? Create a way for gentiles (non-Jews) to be converted to Judaism without the need for the Jewish laws. Through uniting the two huge groups, Proculus and his allies seek to create a stronger Rome, unified by law and religion.

The book is well-researched, with each Caesar a nod to history, the knowledge of Jewish communities most akin to Christianity, and Curley’s biblical information shows the clever way religion can be reinvented. The history will put some readers in the mind of the Book of Kings, or, for those less biblically versed, in the dusty classroom where they first had the classics explained to them. While for some, this will distract from the story, the historical distance emphasizes the parallel distance Proculus and Maximus feel from their goals. The disconnection from the reality of their actions proves highly effective as the book progresses.

Curley plays the long game in the set-up for this book, just like Proculus with his propositum. Antioch is the setting for part one, focusing on Saul and Proculus developing this plan. Saul is the least informed member of the conspiracy, the Jew needed to spread the new religion, and who can be controlled and influenced by his Roman counterparts. Maximus doesn’t receive a proper introduction until Proculus’ first journey to Rome, where he proves himself as a respected and stalwart soldier, with more contacts than you can shake a stick at.

Curia and Saul (who eventually changes his name to Paul), are two of the most interesting characters, as they are brought into the plan, Curia with full knowledge that a potential war between Judea and the Roman Empire might be just what is needed to solidify the sympathy of the Roman people with the Jews, and Paul none-the-wiser for his efforts. Curia and Paul are linked by Curia’s role as the eyes, ears, and center of the plan in Rome. Without her, Paul’s church of Christianity would wilt and wither, but Paul still cannot bring himself to reconcile one simple aspect of Curia’s personality: she is a woman. Paul’s sexism is often a point of tension between the rest of the group and the proselytizer.

Most interesting is that this book makes no claim about the validity of religion. There are true believers in these pages who follow the teachings of Jesus Christ. There are visions, there are miracles, but the line between fact and fiction, between belief and self-deception is so blurred that this is a book with many interpretations. Its merit lies in the momentum of the plans, that once started, cannot stop. All of which is aided by Curley’s knowledge of the subject, which highlight and showcase subtlety well in his book. A worthwhile read. 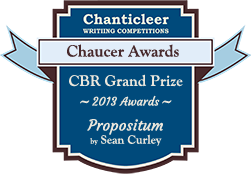