Individually Wrapped tells us the bizarre tale of Sam Gregory’s descent over the condensed course of a couple of days. Set in a 21st century futuristic city, technology has permeated every aspect of the city dwellers’ lives. In some ways things are more efficient: cars drive themselves, doors open on voice command, money is exchanged via thumbprints. None of the technologies presented are far-fetched; many exist today.

However, technology hasn’t made the city easier or safer to live in; traffic problems, vagrants, theft, and serial killers still abound. Workweeks include Saturday; workdays are commonly 10 hours. Sam has integrated his car’s computer system – dubbed Susan – into his home environment to simplify things. Only problem is, Susan is developing her own personality.

Sam has been given the opportunity to pitch to an important client, Nutrixion, for the ad agency he’s worked at for eight years. Sam won an award for a campaign for a paid toilet system, but hasn’t done much since, and is suffering burnout. His former partner is now his boss: a lumbering, balding, donut- and pornography-indulging man who is growing weary of his subordinate’s slacking. If Sam can’t step up his game, he’s in danger of losing his job, and he knows it. But everything in the universe seems to conspire against his being able to get the job done, and he’s running low on excuses.

Sam, and his story, is a vehicle for questioning the big-picture elements of life as we know it: Can we achieve a utopian society? How much control can we really gain over our lives, and is perceived control better than none? Are we just bits and pieces in a bigger machine controlled by a greater force? What liberties are we willing to give up in order to be free from mundane tasks and duties? What happens when what we created starts creating?

Is technology our salvation? Ian, Sam’s coworker, thinks so, and uses it not only for work but for entertainment. He drags Sam out for a night at a club, where the patrons enjoy virtual realities of their own creation, although the alcohol is very real. By now Sam is stuttering intermittently, has headaches and numbness on one side, but doesn’t seem to take any of it as a serious problem; just side effects from a minor car accident and sleeping wrong. He still joins in the fun, and decides to become his spy-movie hero, Victor Nil. The near-comic events of the night continue his downward spiral, although he gains insight into his high-security account, setting off in him a course to take down the product, its parent company, and his agency.

Sam sees himself as a hero, not unlike Victor Nil, but doesn’t give his plan a lot of due diligence, or pay much attention to his cautioning subconscious, with which at this point he is having out-loud conversations. He is also becoming paranoid, encouraged in part by the culture of his workplace. Self-delusion is an interesting state of mind, because everyone can see it except yourself, as it propels you ever deeper into oblivion, where not even technology can save you.

An average guy with a college degree, Sam’s search for meaning and significance collide with his need for privacy, intimacy, and revenge, sometimes helped but more so hindered by technology. Individually Wrapped is a cautionary tale about the pitfalls of computers taking over in a modern world, showing how humans might not benefit from its intruding tendrils as much as technology proponents had intended in their quest for a utopian society. 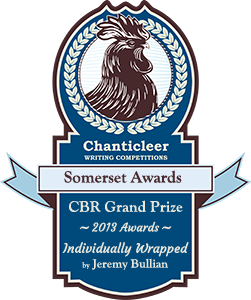 Individually Wrapped  by Jeremy Bullianwas awarded the Grand Prize in the Somerset Awards for Literary and Contemporary Fiction, a division of Chanticleer Reviews International Writing Competitions.