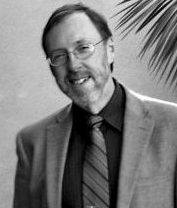 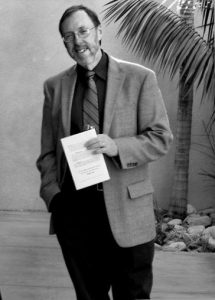 Keith took home the 2016 Grand Prize in the CIBA CLUE category for A Matter of Justice.  He’s a quiet man whose chosen genre, Mystery/Thriller, fits well. He’s a baseball fan who writes with clarity and fleshes out his lead characters with believable determination and grit.

Chanticleer: Tell us a little about yourself, Keith, how did you start writing?

Tittle: I have been writing creatively for most of my life. In fact, there is a picture of four-year-old me sitting in front of my dad’s old portable typewriter, probably caught in the throes of my first case of writer’s block. But I never seriously considered the possibility of doing something with my writing until I took an Introduction to Writing Fiction course — taught by Sheila Simonson, the author of the Lark Dodge and Latouche County Mystery series — and came away with a much better sense of my abilities.

Chanticleer: That’s a good way to start! When did you realize you that you were indeed an author?

Tittle: I don’t think the transition from writer to author happened for me until I held the proof copy of my first mystery, Drawn Back. It’s an amazing feeling to see your name on the cover of a book but, until that moment, I still harbored nagging self-doubts about my ability to see a novel through from beginning to end.

Chanticleer: That’s a big fear for many authors. How to get from Beginning to End. But once you start writing, the answer comes. What genre best describes your work?

Tittle: This should be a far easier question for me to answer than it is. I would classify both Drawn Back and A Matter of Justice as Mystery/Suspense at their core, and yet they are as different from each other as they are alike. A Matter of Justice dances on the edge of being a thriller. Drawn Back is a little more character-driven, and has elements of romance and time travel. But if you’re going to hold my feet to the fire, I’ll say I write Mystery/Suspense. 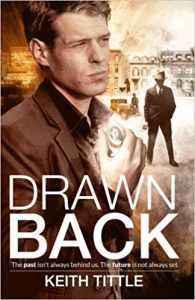 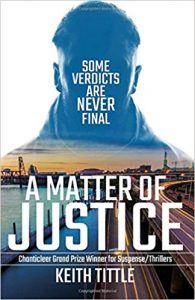 Chanti: What led you to write in this genre?

Tittle: I like to tell people that I wrote my first novel for a demographic of one; the only person I could be sure would buy my book was my mother, and she loved both mysteries and stories of time travel. But it’s also true that the plot for Drawn Back chose me, rather than the other way around. As the story unfolded for me I found that I loved the challenge of writing a complex mystery with so many moving parts. I also enjoyed the opportunities the genre offered to explore my characters’ motivations and morality in the darkest of circumstances.

Chanti: Do you find yourself following the rules or do you like to make up your own rules?

Tittle: Rules regarding genre make excellent guidelines, especially for new writers, but I think if you adhere to them too closely you risk being formulaic. My writing always begins with a basic premise, a general idea of where the story begins and where I think it will end. In the back of my mind, I have the details of the crimes being solved, the why and the how and the who. How the story then unfolds after that is dictated almost entirely by the characters I’ve put in place. There is no outline, no formula … and no rules.

Chanti: That is fascinating. It takes a lot of trust in your author abilities to be able to do that. Give us some of your favorite authors and describe how they influence your work.

Tittle: My approach to storytelling and dialogue has probably been more strongly influenced by my love of movies — particularly those of the 1930s and 40s — than by any specific author, but there are a few I would love to be favorable compared to.

I’ve always been drawn to the humor and versatility of Terry Pratchett and Christopher Moore. Both excel at creating characters who are 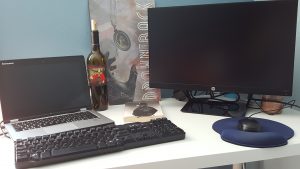 intensely human, entirely relatable, and completely individual. I certainly strive for that in my own books. Within my genre, I think Dashiell Hammett should be a required read for any writer who wants to join the ‘murder and mayhem’ club. From Red Harvest and The Maltese Falcon to the Continental Op short stories, Hammett was an absolute master. Another mystery writer I’m addicted to is Timothy Hallinan. I love the wit and humanity he instills into his revolving cast of characters, and his Junior Bender series is about as much fun as you can have in the world of crime fiction.

Chanti: Love those authors. Good choices! You mentioned that you were influenced by the movies of the 30’s and 40’s; why that period, specifically?

Tittle: I think it has to do with the Production Code that was in place at the time. The strict rules regarding sexuality, language and violence forced writers and directors to be more creative and subtle in their storytelling. The best of them, people like Preston Sturges and Howard Hawks, were geniuses at providing just enough detail for the audience to fill in the more salacious — or graphic — blanks for themselves. Moviegoers, as well as readers, are far more intuitive than they are sometimes given credit for.

Chanti: Right. Good point. What areas in your writing are you most confident in? What advice would you give someone who is struggling in that area?

Tittle: My approach to storytelling tends to be more cinematic, with multiple viewpoints and quick cuts. Because of that, I think I’ve had to become fairly adept at creating, and then inhabiting, a diverse cast of characters in each of my books. Male and female, Irish, Russian … I work hard to make each voice distinct and consistent, without seeming like a cliché or caricature.

As for advice, I encourage new writers to become more active observers of the people around them. Tune into the way people speak, which words they emphasize, their cadence and inflection, their body language. Then, as an exercise, challenge yourself to write something — anything — from that person’s viewpoint. Try to capture their internal thoughts and spoken dialogue, as well as the physical ‘beats.’ To improve your dialogue, flip that exercise completely and write an entire scene with absolutely no physical beats or attributions. If you can still easily differentiate between your characters, you’re that much closer to writing tight scenes without all the unnecessary ‘he said/she said.’

Chanti: That’s brilliant! And a great way to further character development. Thanks for that. What are you working on now? What can we look forward to seeing next from you?

Tittle: I love exploring old crimes, and how they continue to affect people years later. The second book in the Jefferson Dawes series, The War on Cain, revolves around a decades-old, race-related murder in Portland that resurfaces. With current racial tensions running high, the DA’s office is reluctant to reopen the investigation, so it falls to Jeff to find the people responsible.

Chanti: Sounds good! Who’s the perfect reader for your book?

Tittle: Readers of mystery and suspense, certainly, but I think anyone who enjoys losing themselves in the characters they’re reading about — regardless of the genre — will probably enjoy the ride.

You know what to do now, right? If you’ve enjoyed this 10 Question Interview with Keith Tittle, please “like” & “share” it!

And check out his books