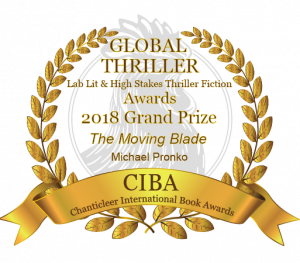 What exactly was Bernard Mattson up to when he committed seppuku* at his Tokyo home – or, was it murder? This is just one of many questions Michael Pronko incites in readers in his latest novel, The Moving Blade.

This is a rich serving of a thriller, a well-cooked and tasty sukiyaki of a novel, written by an American who knows Japan well. He does the magic trick of giving us his Japan with little compromise—the Tokyo settings, subtle cultural difference, and, most exquisitely, the food—always ensuring his U.S. readers understand and accept shunga, ikizukuri, oyasumi-nasai, and meishi as easily as we understand hot dogs and Mom’s apple pie.

The Moving Blade does more than most procedural crime novels; this one is enriched by carefully drawn portraits of both political and cultural differences between Western and Eastern culture. It outlines without proselytizing the concerns of a range of Japanese citizens with the SOFA agreements. But if you think this book is more political than action, think again. The ongoing appearance of Japanese swords are given proper attention to their historical, social and monetary value, as well as their appearance in a killing that is best explained as ritualistic slice ‘n dice.

Hiroshi Shimizu, the Tokyo police detective with an American education is the lead character among a rich cast of Japanese and American men and women. His interior monologs about his career, a few women in his life and the investigation aren’t quite as dark as thrillers from Scandinavia, but this is Japan, and he dishes out enough angst to make us care about who he is and what he does.

Most novels about contemporary Japan seem to be written by Japanese writers and translated into English. One of the accomplishments of this book is its distinctly American style that communicates Japanese life with equal clarity. And while some characters play the part of stock players, understand this, The Moving Blade delivers a solid punch to the gut (make that a well-placed thrust of a wakizashi sword) that readers look for in other-worldly thrillers.

This is the second book in Pronko’s series with Detective Hiroshi Shimizu, in a planned series of five books, the first, The Last Train, was published in 2017.

*Seppuku (hari-kiri): 1: ritual suicide by disembowelment practiced by the Japanese samurai or formerly decreed by a court in lieu of the death penalty; 2: SUICIDE: Merriman-Webster online dictionary.

“A rich serving of a thriller, The Moving Blade is a well-cooked and tasty sukiyaki of a novel, written by an American who knows Japan well.” – Chanticleer Reviews