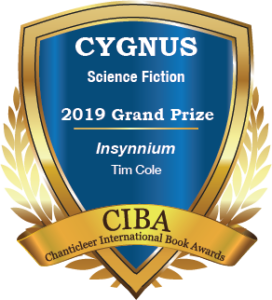 The dramatic premise explored in a new novel, Insynnium, is a wild, immersive leap into a world-changing (but fictional) drug. In other hands, what could be a dystopian thriller goes one step further in author Tim Cole’s capable hands. He focuses on the humans who first discover and use the drug and weaves his story with a devilish charm.

This is somewhat Bill Murray/“Groundhog Day” territory, a film exploring one man’s reliving a day in his life over and over until he learned new behaviors, new skills and came out of it a better man. Unlike “Groundhog,” Max McVista takes multiple doses of the drug against all advice, then somehow expands time itself in what he calls an “AUE” or “Alternative Universe Experience,” enabling him to spend months and sometimes years becoming or experiencing whatever he wishes. When returning real-time, he’s only missed a day or two. (For E=MC squared fans, it’s basically reverse engineering of Einsteinian physics.)

For a man with few basic skills, a drunk who all but abandons his wife and sons, he returns to his family with outsized skills as a musician, entrepreneur, carpenter, medical savant, pilot. Skills he could not have learned in any traditional manner. He lies about how he learned everything, tracing it back to an accident, choosing to bury his drug-induced years of time-traveling across the world, spending concentrated periods exploring whatever he fancies with no time “penalty” in the real world.

Of course, it’s not all happy stories and roses for those who take the Insynnium drug. What fun would that be?

A large cast of characters populates this book, including Max’s beleaguered psychic Native American wife Rachel, Duncan, a Lenny Kravitz look-like who is Max’s best friend, their families, the oddballs responsible for introducing Insynnium to the public. And, of course, the multiple storylines and subplots enriching the already fertile premise of the life and multiple times of Max McVista.

Appropriate to a novel about time travel, there is considerable time-shifting from chapter to chapter that will require readers to stay on their toes as they work through this 500-page novel. And like any skilled author who plants clues neatly in the text – clues that are keys to resolving the overarching mysteries in the book – Cole does the same. What can we say? Here’s an impressive novel by a major new talent, and one we highly recommend keeping an eye on.