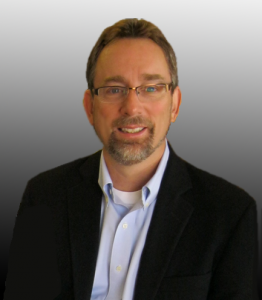 If you’ve ever been to a CAC (Chanticleer Authors Conference), you might recognize author Peter Greene. He’s the one that sits on the outside aisle, quiet and unassuming. Well kids, don’t be fooled! Peter has one of the best imaginations I know of—and there is a reason for his works are award-winning!  You’ll just have to read on to discover it yourself!

Chanticleer: Tell us a little about yourself: How did you start writing?

Greene: My parents were both prolific storytellers, and they were amazingly descriptive, especially my Father. He would act out the voices and mannerisms of all the people. I learned a lot from trying to outdo them.  Then in high school, when I took a creative writing class, my teacher, Mrs. Beem, would just yell out something like “a story with lots of movement” or “use the words ‘freedom’ and ‘cheesecake’ in a short story” and I would just go. The other kids sat and struggled, but I already had a plot, characters, and all that in seconds. She gave me A’s all the way through.

Chanti: That sounds like a great way to be introduced to storytelling!

So just how structured are you in your writing work?

Greene: Very structured, but only in the process, not in the structure of the piece.

Authors Who Have Influenced Your Work

Chanti: That’s a good way to approach your writing! I like the Madman Outliner… sounds like the title of your next book! Name five of your favorite authors and describe how they influence your work.

1) Kurt Vonnegut, mostly his later stuff, like Breakfast of Champions because he became so irreverent after his ‘mainstream’ success. He taught me that style can change, and be ANYTHING as long as it has something valuable to say.

2) Erma Bombeck, again showing that style, if it is true, can let you do anything. I would read her columns, and even though I was about twenty-two years old and a single man in Los Angeles when I discovered her, I identified with her message and I laughed. Her writing seems so effortless! I miss her.

3) Ray Bradbury! He is so creative and smartly expresses even the most obtuse ideas. And he is funny beyond comprehension, as in The Martian Chronicles, and then scary, as in Something Wicked This Way Comes, then poignant, like Fahrenheit 451. His descriptions are poetic. I have read all of his work.

4) David McCullough. This is cliché, but he makes history come alive, and his writing voice (as well as his speaking voice), is so crystal clear. No extra stuff, just the best, most important things are covered in a wonderful manner that intrigues us. He never put his opinion in his works, because he doesn’t have to. History is history, and it is interesting enough.

5) J.R.R. Tolkien because he is the best at everything: plot, character, situation, excitement, humanity, emotion, poetry, prose and adventure. I have read the Silmarillion at least ten times and Lord of Rings each year since I was fourteen. I am always amazed at the scope of his stories, and the languages – truly amazing. I have learned from him that no matter how good I think I can be at times, I am no master. He is the true master. I would never try epic fantasy because the bar has been raised so high.

Chanti: Great insights – and choices! You’ve given us something to chew on. What areas in your writing are you most confident in? What advice would you give someone who is struggling in that area?

Greene: Dialogue is pretty easy and natural for me, maybe because of my theatre training. As far as advice for others who struggle with dialogue, I’d say this: if you are always looking for a witty, snappy, clever, smart ways for your characters to speak, STOP! It will all come out cliché, and no one talks in clichés. It will read like an episode of some seventies, low-budget television series. J.D. Barker said at the last CAC19 that he sits in a Starbucks, has a cup of coffee and listens to what the people around him say, and he types it into his laptop! That is brilliant. It’s natural. I tried it. It was a blast! 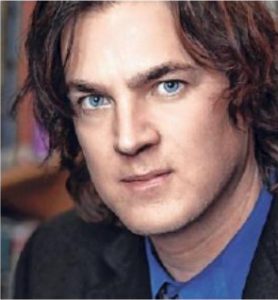 Chanti: Ah, that’s my favorite thing to do! What do you do in your community to improve/promote literacy?

Greene: For the Adventures of Jonathan Moore series, I specifically targeted YA readers. I consciously write each book to graduate the reader from the fourth-fifth grade reading level with Warship Poseidon, to the sixth-seventh grade level with Castle of Fire, then Paladin’s War finishes on the ninth-tenth grade level. If a youngster reads all three, he jumps several reading levels! I also donate books to schools and libraries in the area and have done a few talks to writing classes. 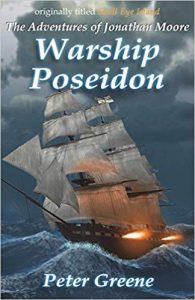 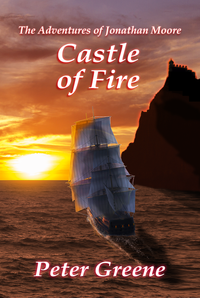 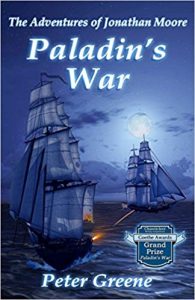 Honestly, my book reviews from Chanticleer after my winning the Goethe award in 2018 and the (Chanticleer) review of Paladin’s War exploded my sales. I increased my sales by over 400%, so that worked for me! – Peter Greene

Chanti: That’s awesome! So, you give away books and present writing classes, what else do you do to market your books? What’s worked to sell more books, gain notoriety, and expand your literary footprint?

How do you separate your books in a crowded marketplace?

Chanti: That is incredible! I love that – especially how Chanticleer Reviews helped to boost your book sales by 400%! I think we need that on a t-shirt…

What is different about your series from other YA books out there?

Greene: Two things: I avoided all magic, superpowers and paranormal material. That’s all fun – but there is too much of it out there already. None of us will ever discover we have wizards or Olympians for parents or have a mystical ability. For this series, I wanted to point out that real heroes do exist, and they have throughout history.

I also decided to take it easy on the terminology and more unsavory aspects of life at sea. I’ve always loved the classic sea stories in Stevenson’s Treasure Island, Forester’s Horatio Hornblower, and O’Brian’s Jack Aubrey series, but I couldn’t help thinking that for most of us, unless one had supporting texts and companion guides to get through all the jargon and technicalities, one could easily become lost-and maybe surrender to something easier to read. That would be too bad. And the things you do really need to know, well, wouldn’t it be best to learn that along with the characters? The ones that started out as land-lubbers just like you and your kids?

The Adventures of Jonathan Moore books are about one would-be hero and his friends who try to succeed using only their courage, their wits and industry alone – no magic necessary. And though I will never fill the shoes of Stevenson, Forester or O’Brian, I can attempt to follow in their footsteps.

Chanticleer: That’s great! But you never know…you may be the one to fill their shoes if  “Adventures of Jonathan Moore” are any indication!

Now we would really do need to know a little bit more about when did you realize you that you were an author?

Greene: I got my degree in Theatre from Illinois State, and a playwriting professor said I had a “knack for dialogue and physical humor.” That made me continue writing. I wrote screenplays after college, and a studio exec at 20th Century Fox pulled me aside and said “you really can write, keep it up” – then years later, my first novel, Warship Poseidon won the Adventure Writers Competition’s Grandmaster award, and Clive and Dirk Cussler chose the winner. When Clive announced my name, he said “I read your book, you know. Beautifully written.” THAT made me think that maybe I have a little writing ability. So when I write, I always think “maybe Clive and Dirk will read this so it better be my best effort.”

Editor’s Note: Clive Cussler’s books have been published in more than 40 languages in more than 100 countries. They are New York Times and international bestsellers. He has written 17 books in a row that reached the New York Times’ fiction best selling list. He is of a select group of authors to achieve this status. Cussler has also published more than 50 novels—quite the back list that keeps him on the list of richest authors in the world.

Chanticleer: Holy Moley, man! That’s Clive & Dirk Cussler! I can’t… I just need a moment… Okay then, what led you to write what you write?

Greene: I write a lot of different stuff in different genres, because, why not? The Adventures of Jonathan Moore series is YA historical fiction, and it all happened by accident. One night, as I was putting my children to bed, I realized that I was tired of reading the books available on our bookshelf. Knowing they were crazy about the Pirates of the Caribbean movie, I just said, “Tonight I’m going to tell you a story about twelve-year-old Jonathan Moore who lived in a dark and filthy alley, and how he ended up a hero on a tall sailing ship.” I kept telling a little bit each night, making it up as I went. My wife, who was listening to the stories each night, suggested that I write it as a novel. Ten years later I have three books in the series!

Chanti: And so the magic began… How do you come up with your ideas for a story?

Greene: Good question! Usually, something just clicks that I observe or realize, and off I go. For example, I was thinking about hidden social casts in America and I thought “Wow. People don’t see it, do they?” So BAM! This Sci-Fi idea hits me for a novel, the characters came quickly and then a plot and now the outline is almost finished.  I’m starting it now. It’s a strong female character who uses history and propaganda to, well, you will have to read it!

Chanti: A SciFi novel! We can’t wait to read it! Are you going to enter it into the Cynus Book Awards?

Chanti: Thank you, Peter Greene with an “e,” and we look forward to seeing you at CAC20!